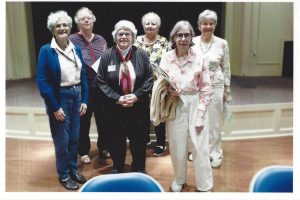 For many new residents, exactly where Collington is located is something of a mystery.  Mitchellville?  Bowie?  Whose local government do we fall under?  Do we have a mayor?  A school board? The answer is we are not part of any of incorporated city or town with its own local government.  We live in an unincorporated part of Prince George’s County, Maryland, and are under the jurisdiction of the County government.

The answer is we are not part of any of incorporated city or town with its own local government.  We live in an unincorporated part of Prince George’s County, Maryland, and are under the jurisdiction of the County government.

Some of us are lifelong residents of the County, but we may have previously lived in one of its 27 incorporated cities and towns like Bowie, Greenbelt, and Upper Marlboro.  Many of us are new to Prince George’s or even new to Maryland.

Your MaCCRA chapter board felt that it is important for all of us to know something about our local government and how it functions.  After all, with few exceptions, we are all citizens and voters.

We are fortunate that one of our newer residents has lived here most of her life and worked for the County government in a number of important positions.  We are grateful that Mary Godfrey is here to clue us in about our local government here in Prince George’s County. 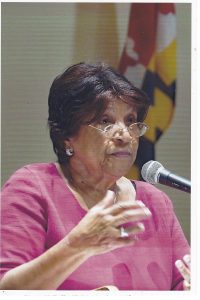 To respond to this need, on Tuesday, October 24, 2017, the Collington chapter of MaCCRA presented Mary Godfrey, in a program entitled: Prince George’s County: A Light Touch. Mary, a long-time employee of Prince George’s County, spoke of her long-term career in personnel as well as director of Parks and Recreation. Her talk covered the demographics of the county as well as the function and roles of the county executive, the council members, the elected offices and other 2018 ballot issues.

She stressed how important it was for Collington residents to stay informed so that they could vote in the general election in November 2018 and other elections that influence the Sixth District, where Collington is located. MaCCRA members have work to do!

In order to support our work, please join the Collington Chapter of MaCCRA. Contact Charlotte Melichar at cmelichar (at)yahoo.com for information about the annual dues.